The President’s Day three-day weekend is a much-needed reprieve in the middle of February.  My friends, Ian and Mike, came out to NYC for a few days to blow off some steam and enjoy the offerings of the city.  As always, by the time they left I thought my liver was going to explode and my lack of sleep was catching up with me.  Here are the highlights:

In addition to the major events listed above, we watched the opening ceremony for the Vancouver Winter Olympics and played drinking games while watching Three Sheets.  As always, it was a great time and we made the most out of the short time and bad weather.  Until next time! 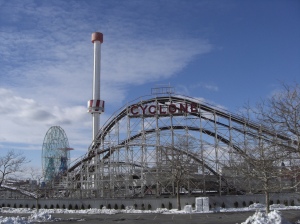 I am also including some of the pieces that struck a chord with me while at the MoMA and Met.

A weekend in the Poconos isn’t complete unless some fine liquor is consumed.  While the food was fantastic (well mostly, I made a forgettable Scotch Broth), I am going to focus on an amazing Poire Williams from France and a lovely 16-year-old Whiskey from Ireland. 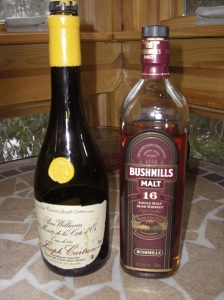 Poire Williams is a pear flavored ea-de-vie/brandy/schnapps made mainly in Germany and France.  Most of the times it is around 70 proof (35% alcohol), but this special bottle of Joseph Cartron Poire Williams from France is 98 proof (49% alcohol) and packs a delicious punch.  The sealing wax used to keep the cap on is always a pain to break through, but it gives it a beautiful touch.  Unfortunately I cannot find it anywhere in the United States, so it is one of those items that I get when I travel to Germany.

As for the Irish Whiskey, it is 16-year-old single malt from Bushmills (Northern Ireland).  It is a fantastic whiskey with nutty flavors and a lot of character.  I am guessing that comes from the fact that it ages in three different casks: an American Bourbon cask, a Oloroso Sherry cask, and finally finished off in port wine pipes.  Long story short: Delicious!