Now that we have officially moved to the Poconos I am trying to use the grill as much as possible.  The simple pleasure of grilling has been missing from my life for nearly three years, so I am doing my best to make up for lost time.  As with most of our cooking, we weren’t exactly sure what we were going to have for dinner.  Once we were inside the local grocery store it was hard to miss the big sign touting their Memorial Day sales.  Near the top of the list?  $4.99/lb fresh lobster.  Yes please, we’ll take two.

The first lobster, a good-sized male, weighed in at about 2.2 lbs.  The second lobster, a female since she had the red roe sacks, was about 1.5lbs.  As an animal lover, I’ve always had some issue with the boiling process.  I have learned a technique that makes me feel a bit better though: Put the lobsters in the freezer for 10-15 minutes before dropping them in the pot.  After cooking for about 8 minutes I pulled them out, split them in half, cleaned out the innards, and put them on a plate.

I mixed all of those together and brushed them on the inside of the lobsters.  Over a medium/hot grill I placed the lobsters meat-side down, and cooked for about 5-6 more minutes, flipping a few times to distribute the heat.  While I was cooking those, I added some partially boiled sweet corn to the grill.

10 minutes later it was time to eat!  Delicious.  And of course, as the title suggested, I washed all of it down with a nice 750mL bottle of Delirium Tremens. 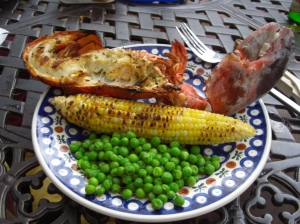